Recent activity from a Trickbot campaign targeting the insurance and legal sector1 shows that the botnet is still a threat, despite U.S. Cyber Command’s attempt to disrupt it in October 2020.2 Given the potential impact of this threat, we are releasing this detailed report on Trickbot’s functionality to provide our customers and security researchers with the knowledge to prepare for and defend from potential Trickbot-related threats.

In this report, we describe Trickbot’s packer and process execution chain, provide insight on identifiers generated by the malware, as well as detail its signature verification and persistence techniques. We include an explanation of the configuration and how it is decrypted during execution, along with an overview of the network flow and the capabilities of the command and control (C&C) protocol.

Trickbot uses string encryption, and so to support other researchers, our full report includes a script to decrypt strings embedded in the sample we analyzed.

Trickbot, first observed in 2016,3 has transformed from a standard banking trojan into a highly modular loader used by financially-motivated cybercriminals, as well as by threat actors linked to nation state activities.4 Trickbot is sold as malware-as-a-service (MaaS) and has been linked to multiple security events5 in the past. The following timeline shows a list of events related to Trickbot:

We have seen Trickbot-related indicators, as well as malspam campaigns distributing Trickbot in our own data sources. Since its first appearance in 2016, the malware authors behind Trickbot have developed different kinds of modules6 for capabilities such as:

Trickbot is polymorphic, and as a result, the behavior and characteristics may differ between variants. 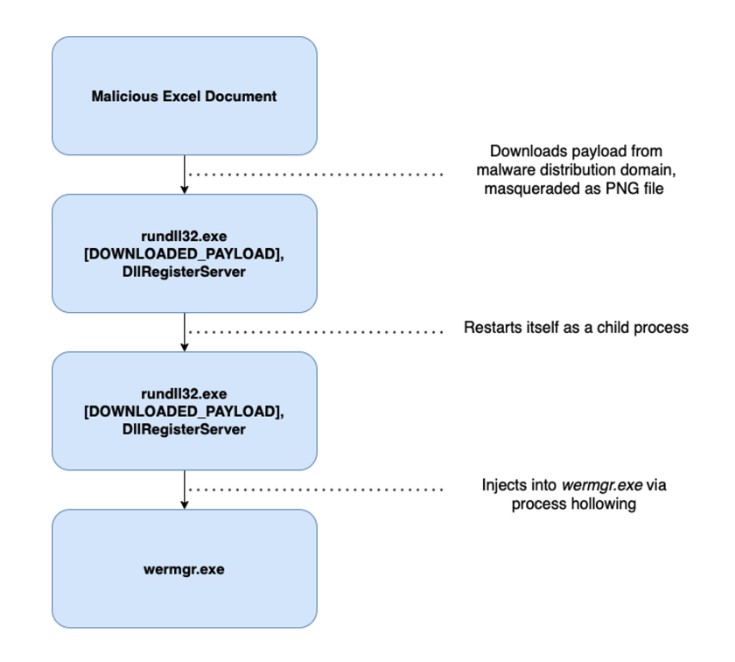 The Trickbot loader has an evasive packer that uses a variety of anti-analysis techniques to prevent researchers from debugging and diving into the packer itself. Since the focus of this paper is analyzing the behavior of the loader, we do not include an analysis of the packer itself; however, we did identify the following anti-analysis measures:

Trickbot uses string encryption to hamper reverse engineering. The encrypted strings are embedded in an array, and each time one is decrypted, an offset is pushed as a parameter onto the stack to determine which string/array element to decrypt. Figure 3 below provides an example of encrypted strings in a disassembler; we have placed the decrypted string next to each as a comment. The snippet in Figure 4 provides Python code for researchers to decrypt strings on their own.

Prior to communicating with its C&C, Trickbot generates different kinds of identifiers, some of which are used to give the attackers information about the victim’s system when they are exfiltrated via the C&C protocol. We also believe that some of them are used to distinguish between different infections and/or campaigns. We confirmed several identifiers:

The AES key is generated by taking the top 32 bytes of the XOR’ed config buffer and copying it into a separate buffer. Next, the malware generates a SHA256 hash of the 32 bytes and appends it to the end of that same buffer. The malware continues to generate SHA256 hashes of the whole buffer and appends the new SHA256 128 times. The final generated hash is the AES Key. In Figure 5 below, we provide a graphical overview of the configuration decryption routine. In the bottom box of the diagram, “IV” is an abbreviation for the custom initialization vector used for decryption.

Trickbot generates the initialization vector in the same way, except that rather than taking the top 32 bytes, it skips the first 16 bytes. 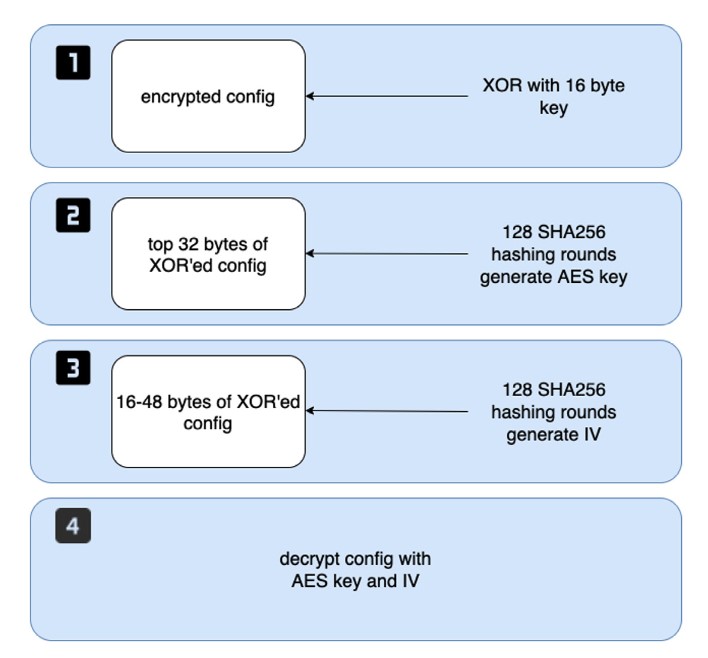 When we extracted the configuration from the Trickbot loader, one of the things we found was a list of IP addresses with tags. The table below provides the meaning of the tags from the config:

IP addresses embedded with the srva tag are addresses that do not contact a valid C&C server but are deliberately added to confuse security researchers. During config parsing, Trickbot uses an algorithm to transform these into valid IP addresses.

Trickbot uses PCS30 signature verification to check whether embedded or received resources are valid. For decryption, Trickbot uses the same XOR process as it used for the first step of AES key generation. The algorithm used to validate signatures is ECDSA_P384.11

We have confirmed that the analysis sample verifies the configuration files and the modules sent by the C&C server but there could be additional fragments that it verified as well. 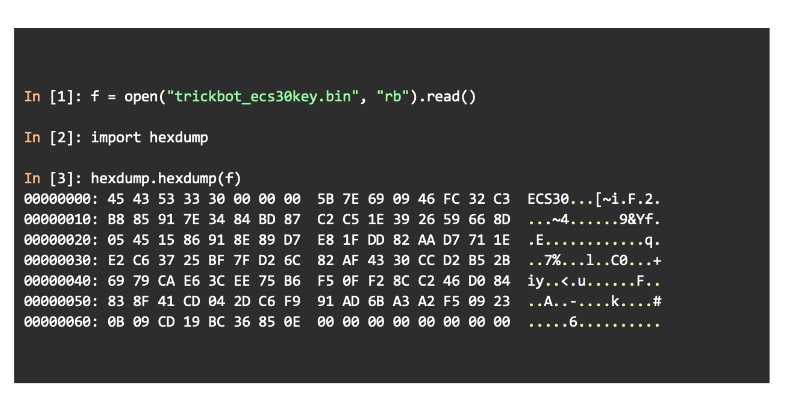 The Trickbot loader will try to achieve persistence via task scheduling on the victim’s system. The malware first creates a directory in the AppData\Roaming folder. It will then drop an executable into this folder and set a scheduled task to run with the highest privileges possible on System Startup.

Other reports state that the scheduled time differs between variants, just as there is variance in the tool that the malware masquerades as. 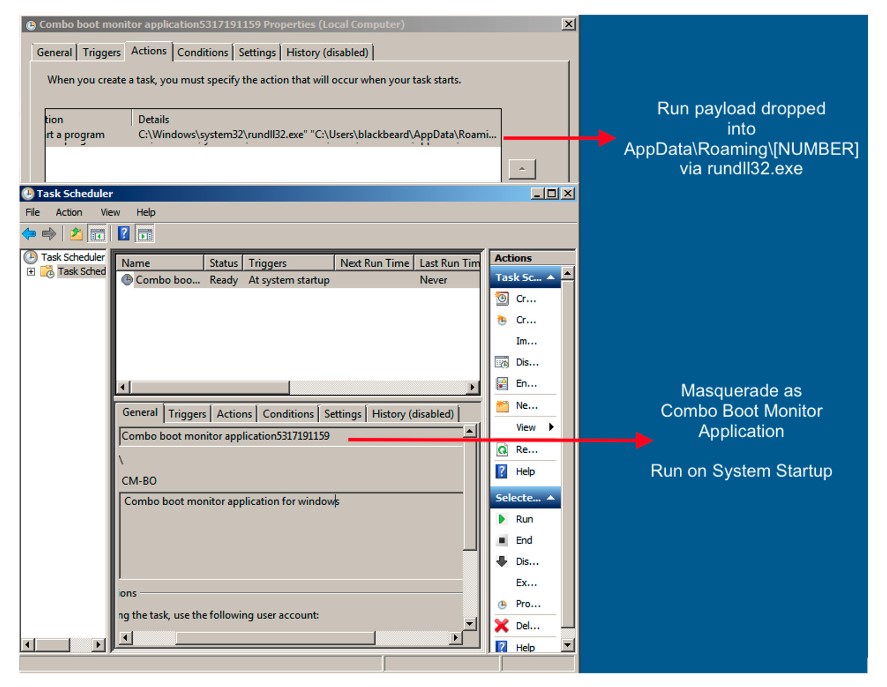 Figure 7: Screenshot of Task Scheduler in Windows with task created by Trickbot

The Trickbot loader communicates with its C&C server over HTTPS. The different C&C instructions are separated by a specific command ID, which is always embedded in the HTTPS request/response that the server and client exchange with each other.

Client-based and server-based commands can be differentiated because client-based commands are C&C requests sent from the victim machine to the server. Researchers from Fortinet12,13 analyzed the Trickbot botnet, which assisted with our analysis of C&C communication.

Trickbot is a very modular trojan and will therefore try to download specific modules depending on its configuration and the instructions issued by the actor.

First, it tries to contact its C&C server and issue a C&C request with command ID 5, to download a module. We believe this command is intended to download the pwgrabber15 module, which is included in the AutoRun config tag, and is used to steal different kinds of passwords from an infected system. However, during our analysis, we were not able to fetch the payload because the C&C server was already offline. The user-agent is hardcoded into the binary and decrypted via the string decryption algorithm we provided earlier in Figure 4 of Section 3.2.

Figure 8: Initial HTTPS GET request to download an additional module

Next, the Trickbot loader fetches the victim’s external IP address using one of multiple legitimate domains that offer this service. The following figure is an example of an HTTPS request to identify the IP address.

Trickbot also checks whether the client is behind NAT and informs the C&C server:

Figure 10: Informing C&C server whether client is behind NAT

Afterward, it attempts to register the bot via command 0 and tries to exfiltrate the following information:

After registration, Trickbot sends out logging messages to its respective C&C server via command ID 14. The following two GET requests show that the binary tries to exfiltrate information about the execution environment. This includes the user executing the file and the path of files related to Trickbot.

Figure 12: Sending out logging messages to inform on module execution

Since we are hijacking Trickbot’s behavior, the file it tries to execute does not exist on the analysis system. As a result, it sends two other C&C requests informing the server that the execution failed:

Figure 13: Sending out logging messages to inform on module execution

It first sends out a C&C request with command ID 10 and the digit 62 appended immediately afterward. This informs the C&C server that the next request will contain logging messages regarding the process for downloading and injecting a module.

This report provides security departments with a detailed analysis of Trickbot to proactively prepare against this type of threat. The insights into Trickbot’s algorithms and configuration are intended to aid researchers in their analysis, and providing the C&C protocol capabilities and persistence mechanism is intended to assist in detecting already existing Trickbot infections.

In October 2020, a joint operation of law enforcement and tech companies attempted to take down the Trickbot botnet. The actor(s) behind Trickbot returned two months later in a campaign with newly developed modules, demonstrating they are able to recover quickly following a compromise of their infrastructure.

We expect that Trickbot will continue to grow and evolve. In order to prevent, detect and mitigate threats regarding Trickbot, we recommend the following: