The Smish is Coming from Inside the House

A new technique for bypassing mobile spam filters and distributing malicious content was recently observed in text messages received by a number of users. Where mobile phishing often includes a fake sender phone number, these malicious messages appear to come from the victims themselves. The messages include a link that, if clicked on, enables threat actors to steal victims’ information. We analyzed one campaign in depth and uncovered a large infrastructure and a complex pattern of redirection to overcome automated security filtering. Operations of this size require significant planning but allow the actors to profit even when only a small number of users fall victim to the lures.

In this report, we will step through a case study of a malicious text message, an analysis of the domain names, and an overview of the threat actor’s redirection infrastructure, including what we will refer to as the front-end domains, campaign broker domains, clickbait pages/domains, and final landing pages/domains.

Smishing is the combination of the terms “phishing” and “SMS” (short message service, also known as text messages). Smishing messages are sent by bad actors to get victims to reveal private information, including passwords, identity, and financial data. The messages typically include some incentive for the recipient to click a link, which may be for a site that hosts malware or a page that attempts to convince the user to submit data through a form.

Actors have regularly used spoofed sender numbers in the text messages to evade spam filters. However, those messages that are not automatically detected by the mobile provider can be stopped by blocking the sender’s phone number. In response, threat actors continue to evolve their own techniques. In a well-known version of mobile phone spoofing, a recipient receives a text or phone call from someone who appears to be in the area close to the recipient. Users are hesitant to block local phone numbers for fear it would also block legitimate phone calls and messages.

Spoofing the recipient’s phone number is another advance by actors to overcome spam filtering and blocking, and to convince users to click on the embedded links.

On March 29 and 30, we observed multiple smishing texts from one campaign, and we will analyze the details on one of the messages, as a case study, below. All of the messages we saw in this campaign began with the same content; the only part that changed was the URL. The text we will discuss is shown in Figure 1 below.
Figure 1. Case study message; the full URL is redacted because it may uniquely identify the recipient 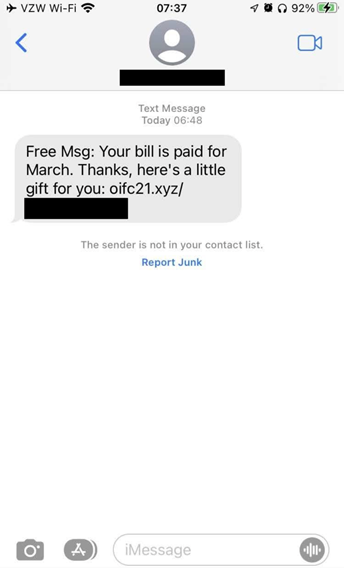 The link in Figure 1 above used the domain oifc21[.]xyz, but we saw a variety of domains used. We will call the domains in the text messages the “front-end domains”. We saw these domains use only the top-level domain (TLD) .xyz. When we clicked on the link, it did not lead us to oifc21[.]xyz; instead, multiple redirects occurred before a final landing page was presented. In this instance, we were redirected to goodasgold[.]shop, then takeoneforlove[.]com, and then eshatl[.]xyz, which presented a fake Verizon survey page. After completing the survey, a message appeared that thanked us “for being a great customer” and asked us to click the displayed button to claim a new Apple Watch.

Figure 2. Example of one of the faked survey questions
Fake Verizon survey 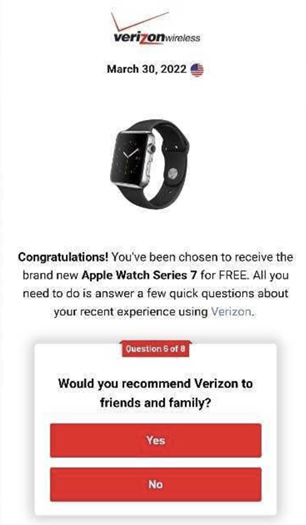 The threat actors tried to imbue their content with a sense of urgency; this is a common tactic used to pressure victims into complying with the scam. After we completed the survey, the webpage warned: “if you leave this page without claiming your reward, we have no choice but to give another loyal customer”. Clicking the button again redirected us to a new website, smartfashiondaily[.]com, where the actors asked us to pay $6.85 for “Shipping & Handling”. The actors also asked for our name, email address, phone number, mailing address, and credit card information. 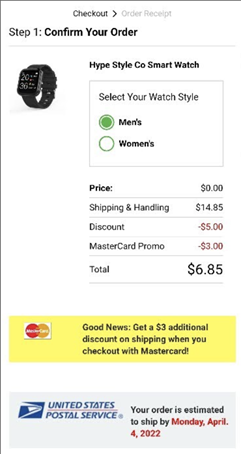 After providing the information, we were told that our credit card number was not valid.
Figure 4. The message shown after we submitted shipping and credit card details

Our analysis shows that the same actor carried out at least two campaigns in March:

Both campaigns share the same set of domain names registered on 6 March.

From several examples, we have noticed that the domains used in the SMS messages have a distinct pattern: four or five alphabetical characters followed by one or two digits, all in the TLD .xyz. This allowed us to create a simple regex and apply it to data for March and the start of April.

There were several groups of domains registered in March. Most of the domain names followed a pattern of 4 or 5 alphabetic characters followed by a sequential number within the group.

Figure 6 below shows activity related to the domains associated with this campaign. We can see a small amount of activity from 5 to 8 March, and then a much greater spike between 26 and 31 March. This second, larger spike is associated with the smishing campaign that our case study above came from. 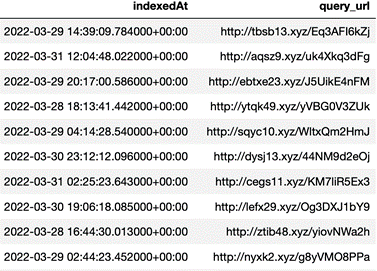 The structure and activity we observed in the two campaigns described in this paper match that of several older smishing campaigns that we have analyzed. The domains used in the redirect patterns all appear to share similar naming conventions and other properties. A deep study of both older and these more recent campaigns show that they have similar structures of redirect requests and groups of domains used for very specific purposes. The diagram below illustrates the flow of requests and redirects between domains in the infrastructure and the assumed functionality of each layer. We think this is a valid model of infrastructure that, with variations, is likely used by multiple threat actors. 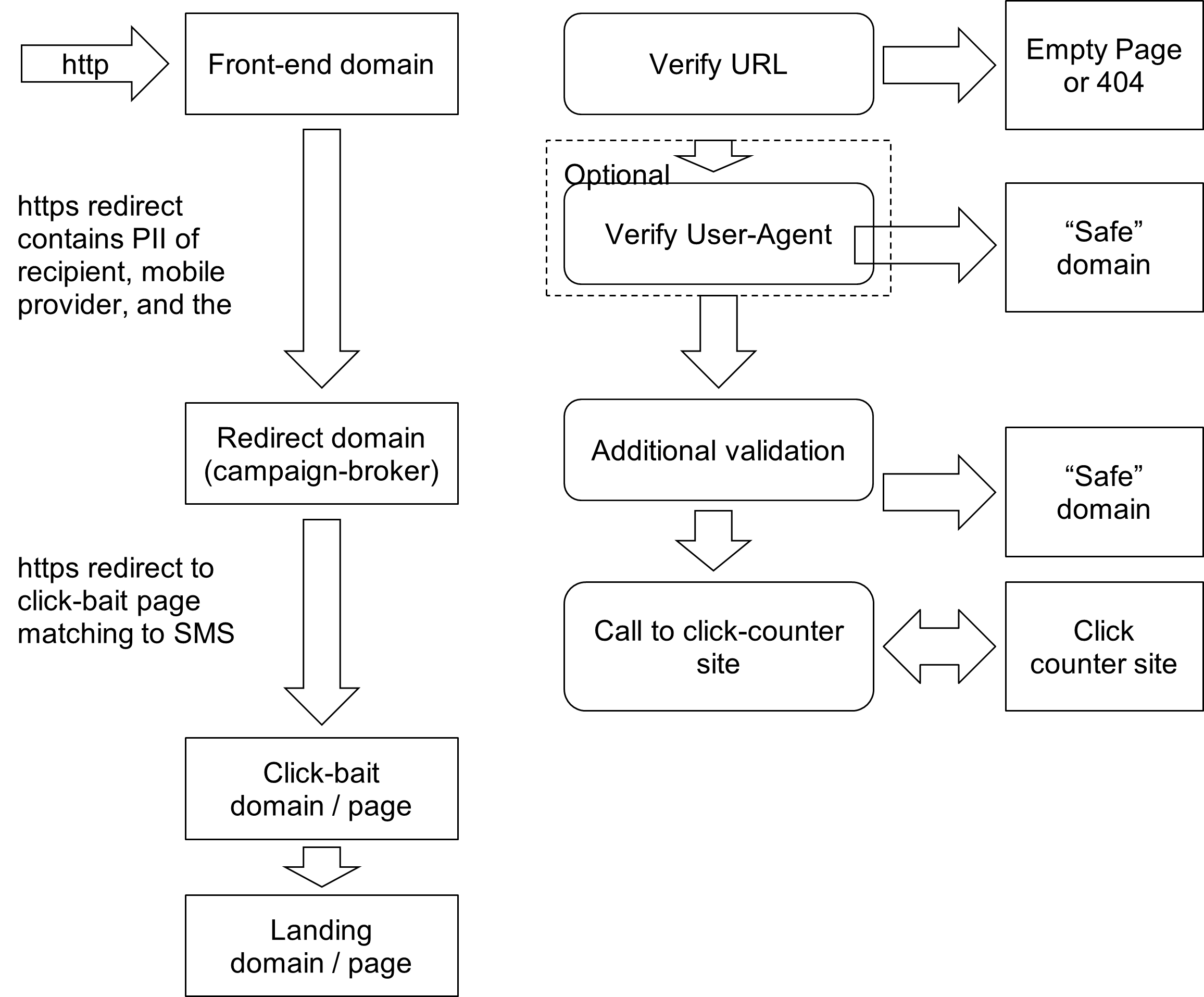 Analyzing the redirect structure showed that it consists of at least 4 layers, all with clearly identifiable purposes. Note that there are some minor differences between the 1TV and CDC campaigns, which we will identify below.

In this campaign, threat actors sent spam SMS messages to Verizon Wireless customers. The messages contained malicious links and appeared to have come from the recipients themselves. The links led to fake survey pages where the victims were asked to submit their personal and financial information, which ended up in the hands of the threat actors.
The actors redirected victims through a series of domains to avoid analysis and detection. We have observed multiple campaigns that used this kind of technique in the past; it makes it particularly challenging for researchers to analyze the malicious URLs. Our analysis of the URL data enabled us to discover additional domains used by the actors.

For a downloadable list of our IOCs on this topic, see the cta_indicators folder of our GitHub repository infobloxopen:threat-intelligence.