Agent Tesla malware is known for its keylogging and credential stealing capabilities, as well as its distribution method as a form of “malware-as-a-service.”

In this campaign, the threat actor(s) used the sender email address sales@oryx-ad[.]ae to impersonate the Abu Dhabi-based oil and gas company with the subject line Labour Day holiday RFQ 191938. The email bodies are empty but the messages carry an attachment with the filename RFQ 191938.xls, as referenced by the subject line. All of the XLS files contained malicious macros.

When the user opens the attachment, they will see the error message “Word experienced an error while trying to open the file.” In the background, cmd.exe (windows legitimate utility) begins to run and executes a PowerShell script via Windows Management Instrumentation (WMI).

The malicious program then creates a scheduled task to achieve persistence and uses the Windows native application aspnet_compiler to compile and connect to the command and control (C&C) server to download the Agent Tesla payload.3 After successful execution of the payload, it starts capturing the victim’s login credentials that have been stored in browsers and registries, while also capturing screenshots using its keylogger abilities.

Malspam attachments containing malicious macros are the primary infection vectors for Agent Tesla. Infoblox recommends the following actions to reduce the risk of this type of infection: 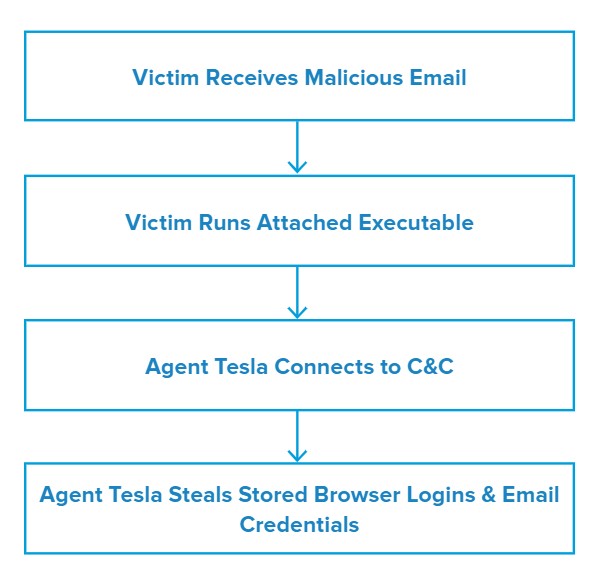