From 1 to 6 April, we observed a malspam campaign distributing a TAR file containing Agent Tesla, a remote access trojan (RAT) designed to steal information from a victim. The campaign’s email subjects attempted to gain the victims trust by impersonating the British bank Standard Chartered. Some of the emails claimed to offer advice from the bank, as well as notified the recipient of a payment.

Discovered in 2014,1 the Agent Tesla RAT has a variety of malicious capabilities such as stealing credentials from browsers, VPNs, FTP and email clients. It can also record the user’s screen and log keystrokes. The threat actor can then use these stolen credentials and keystrokes to log into, and potentially take over, the user’s accounts to access more of their data.

Agent Tesla is distributed as “malware-as-a-service,” reportedly for as little as $12 USD online. This buys a one-month license, an online portal to set up the configuration of the malware, and 24/7 support.2

All of the emails had a TAR file attachment containing an executable (EXE). TAR files are a kind of archive file, similar to a ZIP or RAR. The EXE was the malicious payload containing Agent Tesla. The file names, such as Payment Advice.img.tar, all include .img.tar as the extension in an attempt to disguise themselves as an image (IMG) file. The bodies of the emails are all empty.

Upon opening the attached TAR file, the victim is able to extract the malicious EXE – MY08466Q000951.exe– from the archive. Running the EXE initiates the Agent Tesla RAT. From here, the malware begins stealing the victim’s credentials.

Once Agent Tesla has gathered the information, it exfiltrates it over SMTP and then sends the data to the email address vijay.yadav@mivante[.]com. 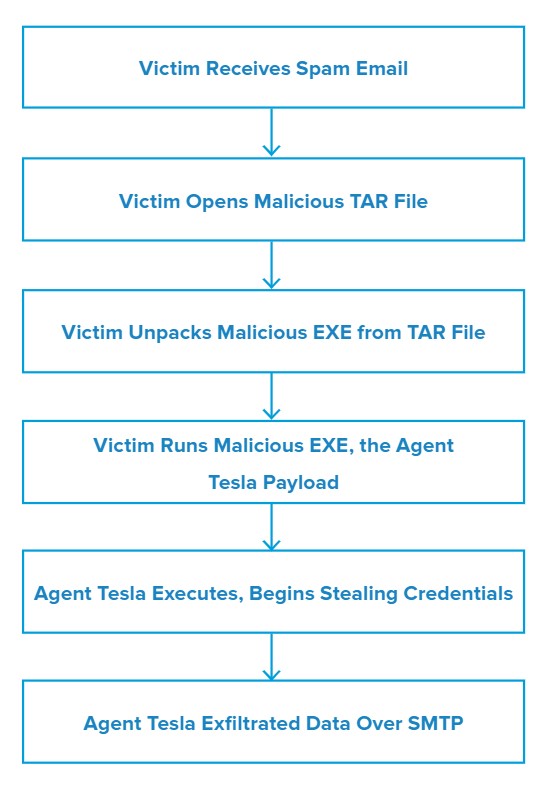