This blog talks about automating grid deployment process and eliminating manual tasks with the help of ansible.

Automation through Ansible simplifies complex IT tasks, thereby not just making developer’s and system administrator’s jobs more manageable but allowing them to focus on other tasks that add value to an organization. In other words, it frees up time and increases efficiency. Ansible uses a simple syntax written in YAML called playbooks. YAML is a human-readable data serialization language. It is incredibly simple.

Once vNIOS ZTP playbook is invoked, it executes a series of steps which are summarized in the following workflow. 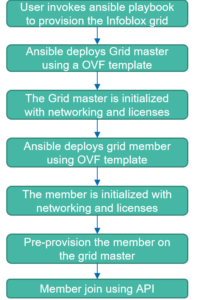 Initialization of grid master and members is achieved through cloud-init.

vNIOS ZTP playbook can be downloaded from https://github.com/infobloxopen/vnios_ztp_vmware. Users can refer README.md file for detailed instructions and prerequisites.

Aditya Sahu manages the TME team at Infoblox Bangalore, supporting Service providers and large Infoblox customers. Aditya has worked with various companies over the last 10 years. His background includes Cloud computing, virtualization, networking scripting. Aditya is at the forefront of customer usage, supporting deployments and engineering teams in their setup and configuration. In his unique position he has the ability to bring customer feedback from his experiences to shape the future of Infoblox’s solutions. In his free time Aditya loves to read and travel.