There’s a heightened interest in Docker networking and IPAM content, so we’re going to look at rkt/CNI and how Infoblox can also be leveraged to provide centralized IPAM functions in a multi-host environment.

Like Docker, rkt is an open-source project that provides a runtime environment for deploying software applications in the form of containers (https://coreos.com/rkt). In the case of rkt, the networking of containers is provided by Container Networking Interface (CNI) (https://github.com/containernetworking/cni/blob/master/README.md).

In this blog, I am going to take you through a typical deployment use case for Rkt/CNI. But, before we do that, I’m going to provide some background on rkt and CNI.

rkt (or, Rocket, as it is originally called) is started as part of the CoreOS project which implements a container runtime environment conforming to the App Container (appc) as well as the Application Container Image (ACI) specifications. This is in support of the Open Container Initiative to define a vendor and operating system neutral containerization standard.

As for CNI, it is the generic plugin-based networking layer for supporting container runtime environments, of which rkt is one. Indeed, the design of CNI is initially derived from the rkt Networking Proposal.

In CNI, a network is a group of entities that are uniquely addressable that can communicate with each other. An entity could be a container, a host or a network device. In this blog, we’ll be focusing on rkt containers, which can be added or removed from one or more networks as they are being launched and deleted by rkt. For a complete description of all the configuration fields, refer to: https://github.com/containernetworking/cni/blob/master/SPEC.md#network-configuration

In the meantime, let’s look at the fields included in the example above.

This is the name of the network to which the configuration applies. In an rkt deployment, the network name is specified as part of the rkt run command used to launch a container.

This defines the network type. In fact, this is the filename of the plugin executable that is invoked to create/remove the network.

The following type of networks are supported out of the box:

This is the name of the bridge created to host the network. Obviously, this a plugin specific field that applies only for the bridge network type.

Following that is a dictionary of the ipam specific configurations:

As in the case for network type, this is the filename of the IPAM plugin executable that is invoked for IP allocation/deallocation.

As we discussed in the previous section, the Network type and IPAM plugin type defined in the network configuration file actually specify executables that get run when required. The network plugin is responsible for the creation of network interface for the container as well as making any necessary networking changes to enable the plumbing. IP address is then assigned to network interface, as well as routes and gateways being set up based on the results obtained by invoking the IPAM plugin.

In addition to the configuration details, context information is also made available to the plugin as environment variables. This include:

Before we go into a deployment example using the Infoblox IPAM plugin, let’s discuss how the plugin works in more detail.

As mentioned above, in CNI, a plugin is simply an executable file that gets run as needed. When run, it is passed configuration via stdin and context information as environment variables. After processing based on the input provided, the plugin then returns the result in JSON format via stdout.

In our implementation we divide the functions into two components:

This is the plugin that is executed by CNI just like any other plugin, and receives the configuration and context data. However, instead of directly interfacing with Infoblox to perform the IPAM functions, it only packages the input data and send it to the Infoblox IPAM Daemon. On receiving the results from the Daemon, the plugin returns the results to CNI.

The Infoblox IPAM Daemon is the component that actually does the heavy lifting and interfaces with Infoblox via WAPI to perform the IPAM functions. The daemon is typically deployed as a container on each rkt host. The introduction of this daemon component is primarily for performance reasons:

Since we’ll be using this configuration file for our example multi-host deployment, let’s explore the fields one by one:

For the  ipam configurations:

As we mentioned earlier, when the plugin is executed, the content of the above configuration is passed to it as stdin. We also mentioned that, in addition to that, context information is also made available to the plugin as environment variables. Let’s take a quick look at this.

The responsibility of the plugin is simply to package up the network configuration and the CNI environment information and send it to the IPAM daemon – which we’re going to look at next.

The IPAM Daemon is the component that interfaces with Infoblox via WAPI to perform the IPAM functions. The daemon is typically deployed as a container. In our example, we are using a Docker image of the daemon, and is started via rkt run as follow:

The important parameters are those that define the IP allocation policy. If you recall, we have specified the following in the CNI network configuration file:

On the other hand, should “network-view” and “subnet” not have been specified in the network configuration file, then a subnet will be allocated based on the network-view, network-container and prefix-length command line parameter – which in this case is “default”, “192.168.0.0/24,192.169.0.0/24” and 25 respectively.

In this scenario, we are going to simulate a container based application that is deployed across multiple hosts, and in which the containers need to communicate with each other. We need to create a network model that supports that within the constructs of rkt/CNI.

In this example, Infoblox is leveraged to provide the centralized IPAM functionality. To facilitate this, we utilize the Infoblox IPAM plugin to delegate IP allocation and de-allocation to Infoblox. The setup consists of two identically configured VMs that serve as rkt hosts, rkt-1 and rkt-2. Each rkt host is a VM that runs an Ubuntu 14.04 image with rkt runtime environment installed.

On each host, a bridge (cni01) is created – all containers launched will be attached to this bridge. Also attached to the cni01 bridge is eth1, which is a network interface connected to the Container Network. In Ubuntu, the brctl command is used to manage linux bridges:

Also created on each host is the eth0 network interface. This is attached to the Management Network through which the IPAM Daemon talks to Infoblox services. I’ll talk about this in the next section.

A CNI network called ipam-test-1 can now be setup that uses the Infoblox IPAM plugin. The network is served by the cni01 bridge we discussed earlier that provide L2 connectivity across the hosts.

First of all, verify that the necessary configurations are in place:

The image is called infoblox-cni-daemon, for example:

Note that an IP has not been assigned to the bridge interface:

Instead, we configured the default gateway IP of 10.0.0.1 in the network configuration file ipam.conf (see Figure 3), which is the IP for the router interface (see Figure 6). Since we are not using the bridge interface as a gateway, there is no need to assign an IP for it. More importantly, this allow us to use the same default gateway configuration for all the rkt hosts.

This is only possible because the CNI bridge plugin allows fine grained gateway configuration, via the following fields:

By not specifying those fields in our CNI network configuration, and therefore assuming the default values, CNI does not assign an IP for the bridge interface. Additionally, it honors the routes settings in the ipam configuration to establish the default route in the container.

Finally, start the IPAM daemon using the rkt run command shown earlier in Figure 5. Obviously, you would need to modify the WAPI connection parameters applicable to your environment.

Putting it to the test

First of all, recall that the IP 10.0.0.1 has been assigned to the router interface and is configured to be the default gateway for the containers. In order for Infoblox not to use the IP to serve allocation request, the IP need to be reserved, as shown:

Next, we are going to launch containers on both rkt hosts and demonstrate that there is no IP collision and that connectivity can be established between the containers across the hosts.

On the rkt-1 host, use the rkt run command to start a ubuntu container specifying the network ipam-test-1, as follows:

When the command completes and display a shell prompt, we are actually inside the ubuntu container. Running the command ifconfig eth0 produces the following output:

where eth0 is the interface attached to the ipam-test-1 network. Note the highlighted MAC address of the interface, and more importantly, the IP address 10.0.0.2 that has been allocated.

Additionally, we can verify this by logging onto the Infoblox management interface:

Next, we repeat the same to launch a ubuntu container on rkt-2. In this case, running the ifconfig eth0 command inside the container produces:

Again, we can correlate that with the Infoblox management interface:

And, lastly, we can verify the expected MAC address using the arp command:

In this blog, we have demonstrated that using the IPAM plugin allows us to easily leverage Infoblox to provide centralized IPAM service in a multi-host rkt container deployment environment. In a follow-on blog, we’ll compare and contrast the features and workflow of CNI and libnetwork. 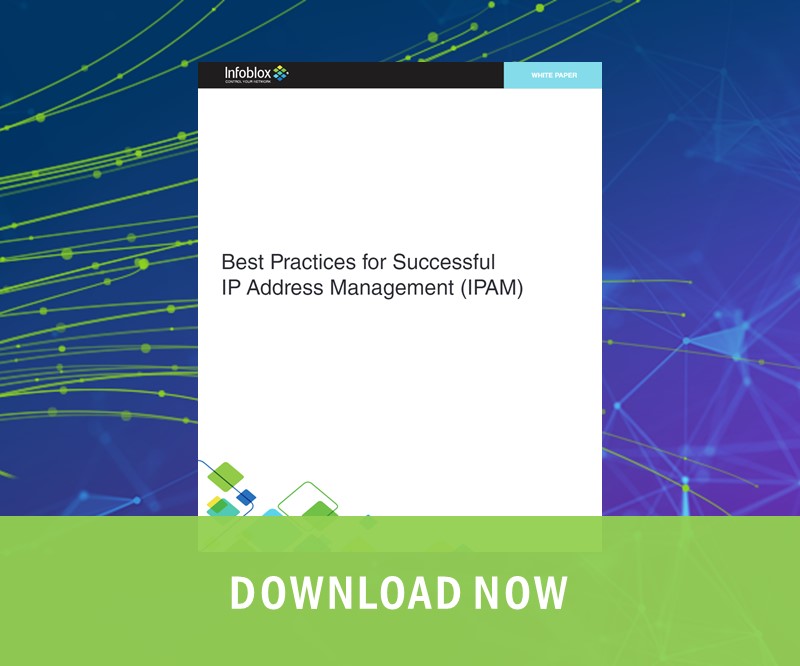